This plant goes by many names: čhaŋšáša among the Lakota people where I live, kinnikinnick among the Anishinaabe to the east, Cornus stolonifera in Botanical Latin, and Red Osier Dogwood, Red Willow, and Kinnikinnick Willow in English. The outer bark is an unmistakable, deep red color. The Lakota name refers to its color, šá (red). In early spring /late winter, many species of shrubs have reddish bark, but I don’t know of any other plant that is such a deep red, all the way down its branches.

i have been taught that toward the end of the winter, before buds swell into leaves and flowers, is the best time to harvest čhaŋšáša, if you’ve going for the bark. Peeling away layers of bark is a good wintertime activity, too — the other seasons, there is more to do outside, and this is a great, calming thing to do while sitting by a cozy fire indoors.

The inner bark is traditionally smoked in a pipe ceremonially, and it’s the primary reason I’ve known about for harvesting the wood. Recently, when I visited the White Earth Reservation for the annual Indigenous Farming Conference, an Anishinaabe friend taught me about uses for the outer bark and inner pith, too: the outer bark can be made into a tea for energy, which sustains them for the long days of maple sugaring season ahead in early spring. The pith, soaked in water, can be used as aspirin. (Willow was the original aspirin!) I haven’t tried either of these myself, so I can’t comment on dosage or anything else about these two uses.

Shortly after I returned home to Standing Rock, my Lakota brother told me a story about the outer bark. He had been visiting an elder, watching him peel and separate the inner and outer bark, when suddenly, the man tossed a large pile of the red outer bark into the fire. My brother knew what the outer bark was good for, but what was he going to do? It was too late and besides, it wasn’t his place to teach that elder. About a week later, the elder came up to him and said that he’d just learned that you could save that red bark and use it as a tea for energy. “Did you know that?!” he asked. “And to think of all that bark I just threw into the fire!” My brother just laughed.

I woulda like to be wrong about this, but I don’t think čhaŋšáša grows wild anywhere on Standing Rock, and I’m not sure if it did before the Missouri River was flooded to create Lake Oahe (the flood wiped out other important plants). All of the čhaŋšáša stands I know of here are cultivated. (It grows wild in a lot of other places, though — I recently saw some on a trip to Olympia, Washington. Interesting, it was growing right next to that other plant that gets called kinnikinnick: waȟpé čhaŋlí in Lakota, Bearberry in English, or Arctostaphylos uva ursi in Botanical Latin.) This year, my Anishinaabe friend took me harvesting near White Earth in northern Minnesota, where it grows wild.

Here’s basically how you do it: take a sharp knife, carefully peel away the outer layer of red bark, and set it aside. Then peel away the inner layer of green (or wood-colored) bark. Set that aside. Then, split it open to allow the white inner pith to pop out. Store each of these separately; don’t put them in a sealed container of any kind until they dry out completely (to avoid mold). This process is easier with thicker branches, but I don’t like to waste anything, so I take the time to peel and process the little ones, too. 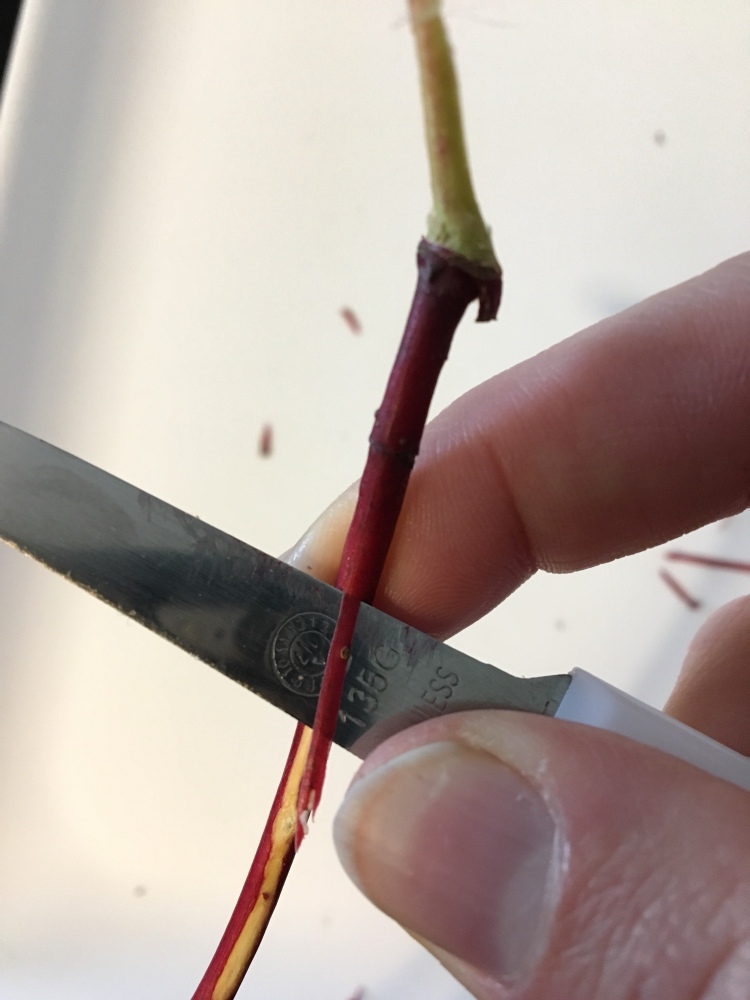 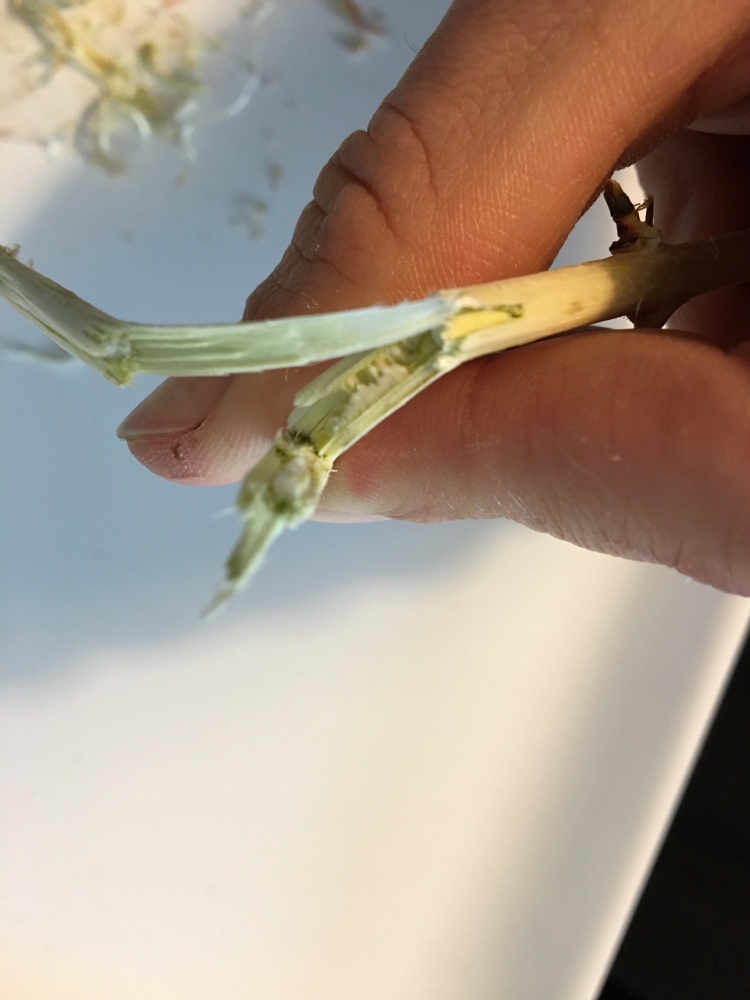 Now, this is probably the most valuable thing I can share: the most outstanding mistakes I made, so you can hopefully not make them.

Waiting too long after harvesting to process it: Depending on how big the branches are and how you store them, you probably have a week until they start to dry out. After the stems dry out, they harden and stick together, making it nearly impossible to separate out the layers of bark.

How to avoid this:

-Process it ASAP after harvesting!

-Don’t take more than you can reasonably process in a week.

-If necessary, wrap it in a plastic bag to keep it moist a little longer. This might buy you an extra day or a few days, depending how dry it is where you are.

-If you find yourself with some that’s already dry like I did last year, try soaking it and then scraping the layers apart withow dull knife. It will make thinner peels, but it’s better than wasting the plant. I wound up soaking it in water overnight, then scraping away the layers with a butter knife. It worked, but it was way more work than it needed to be — so definitely process it fresh if you can.

(This is what it looks like when it’s starting to dry out and adhere. This is the last piece I did at the end of the week. The dry spots get darker, but it will all eventually dry out the same color. At this stage of dryness, it was still doable, but a bit harder.)

Peeling both layers off at once: if you do this, you’re using too much pressure with the knife. Try doing it more gently.

Not using a tray or dropcloth underneath to catch the stray pieces: That created a huge mess to clean up… Especially not recommended in someone else’s home! Enough said.

Being stupid with the knife: the blade is not the best way to split the core open to get the pith, especially if you’re pushing the blade toward your other hand. (Let’s just say that I paid for my čhaŋšáša this year in both tobacco and blood.)

A better strategy for splitting: just break the branches by hand, encouraging splits along the center where the pith is.

I also put a few cuttings with promising buds into water. They have all started to leaf out after about 2 weeks in the water, sitting on my windowsill. Everything I’ve read indicates that they should be propagated by rhizome, not cutting, but we’ll see if I can get any to grow roots. 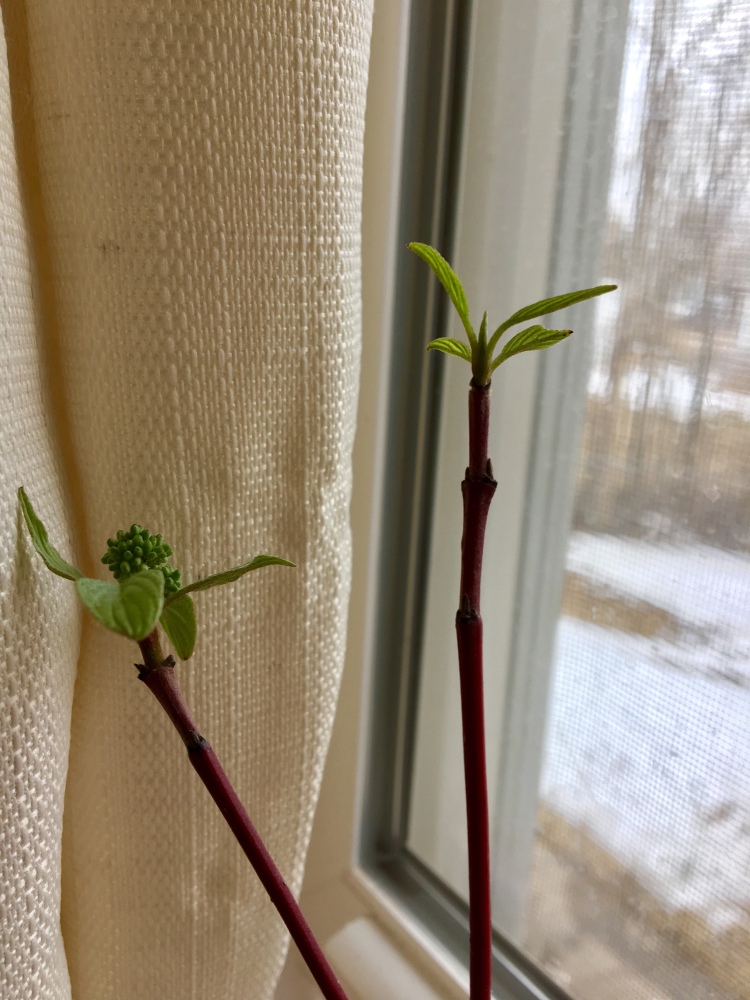 I hope everybody is enjoying čhaŋšáša season!