A friend gave me a Connecticut Cornfield Pumpkin, grown here on Standing Rock. It has been sitting in the library at Sitting Bull College since the fall, and was still in pretty good shape, minus a few soft spots on its skin.

The Lakȟóta word “wagmú” is a great one — see below for the screenshot from the New Lakota Dictionary app. You can use “wagmú” for both pumpkin and squash. Since there are so many ambiguous curcubits that I wouldn’t know whether to define as “pumpkin” or “squash” in English, this makes a lot of sense to me.

It always surprises me that so many people think of a pumpkin as decoration, but not as food. In the past, I’ve fed myself off many delicious pumpkins that neighbors were throwing away after Thanksgiving. Baking a pumpkin down to use in pie, pumpkin bread, etc., is really easy.

Pumpkins store well indoors for a long time. You can can baked pumpkin flesh in jars if you have proper high-temperature canning equipment (I don’t). Drying it is another good way to preserve it, and is a traditional way of storing squashes in this region.

I’m short on freezer space, so I tried drying it for the first time this year. If you slice it thinly, 2-5mm, it will dry quickly indoors, at least here in the winter with the heat going.

There are undoubtedly better ways to do this, but I worked with the tools I had: I pierced each slice with an awl, then ran a cotton string on a long, wide-eyed beading needle through all the pieces, then hung them up to dry.

On the strings I hung over the heater, they were mostly dry by the next morning. I left them up for another 2 weeks to be sure, and to avoid mold. Now I need to figure out what will be the best way to store them long-term. Glass jars would probably be good; I’m not sure what was used traditionally, perhaps parfleche? Anyway, I’m glad to have some more healthy food that I can bring camping and not have to worry about refrigeration. 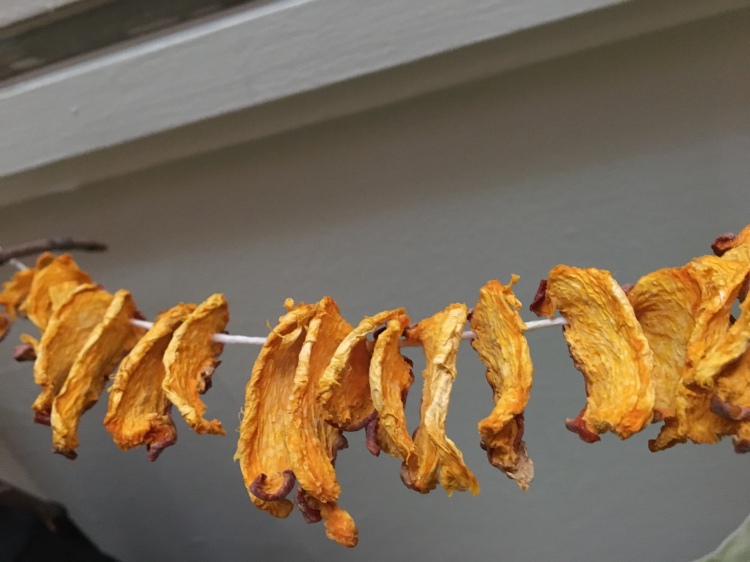 I’ve been pulling the seeds out of pumpkins and squashes to bake as a snack for years (current favorite recipe: olive oil, sea salt, chipotle powder, and oregano). The hardest part for me has always been separating the pumpkin guts from the seeds. This time, since it was a heirloom pumpkin and I wanted to have the seeds for a seed exchange we’re having on Standing Rock this week, I laid it all out on a piece of cardboard to dry. After about ten days on the cardboard, the seeds and pulp separated effortlessly. (It could probably have been separated sooner, but this was when I had time.)

Mistakes I made, to avoid:

–Hanging too many pieces on the same string. It will be too heavy, and fall down.

–Cutting the squash pieces too small. It’s a lot of work to pierce and string them, so don’t create extra work for yourself.

–Slicing from the inside of the pumpkin outward. This makes it hard to get though the shell. It will be easier if you make your slices through a cross-section of both shell and flesh, rather than cutting outside in or inside out.

–Using the wrong kind of knife. I found that serrated works best.

–Trying to separate seeds from pulp while they are still wet. It is SO much easier when they’re dry!

I’ll have to update with the results when I try making soup with these.